Well very early this morning, 3am to be exact, Ashton started with the diahrrea again. It was everywhere! I don’t know what is going on with him, and go figure it is the weekend so I can’t take him to the doc. However, he is in good spirits so I am not too concerned. I have been giving him electrolytes and when I give him formula I have been adding much more water to bring down the calories. He did pretty well today so I decided that we could go to my uncles 50th birthday party. Daddy and Uncle S had gone to Bass Pro this morning early and weren’t back by mid afternoon so grandma came and picked up A and I.

We headed over to my aunt and uncles at about 5pm. There were a lot more people than I had expected but it was nice to see everyone! Nicole looked great too for having just gone through what she has! A decided that when we got there he wanted to sleep (isn’t surprising) and slept for about three hours when I decided to wake him up. I know, I know it isn’t nice but I wanted him to sleep tonight and he wouldn’t have if I had of let him keep sleeping. I was surprised how tired and upset he was with me for waking him up though. Normally you can wake him up and he is still a happy baby. Not tonight. Oh well, Nicole had been waiting and waiting for him to wake up all night and he just wouldn’t. So she did get to hold him finally! She is so great with him! She will definately make a great mom one day!

So here are some pictures from tonight…. 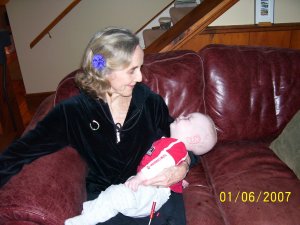 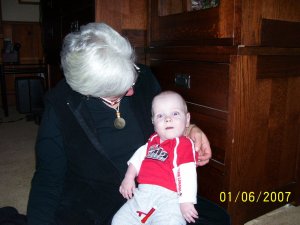