Well I think that maybe, just maybe the doctors are getting their acts together. On Wednesday they came back and started to talk again about going home. I told them that if they made sure the discharge papers said that he was having cyanotic episodes then I would take him home. Well needless to say I didn’t see the doctor again until Thursday. They know that they cannot send a child home that isn’t stable.

I was also told by the doctor on Wednesday that one day soon I need to start advocating for A. I think I almost fell out of my chair. I asked if she was kidding and she said no. I said that from day one that is ALL that I have been doing. I haven’t stopped advocating! And as far as I am concerned I advocate WAY too much in my mind. I shouldn’t have to fight and fight to try and get answers for A. She then told me that doctors are always going to come in and want to do tests and that isn’t fair for me to continue to let this happen. She said at some point I need to start advocating that enough is enough. WHAT?! But no one wants to do tests. And then she told me that it isn’t fair that I am requesting all of these tests for him. In particular the probe that he is having done on Monday. She said it is unnecessary testing that I am willing to put him through. Now give me a break. The last thing I like to see is A having anything done. It is hard for me not to get emotional when they take blood! But I feel the probe IS necessary to see if he is refluxing … end of story.

After some more fighting about the echo cardiology finally (but reluctantly) agreed to do an echo. So that was done yesterday and from what I heard last there was nothing seen. This is wonderful news! Just another thing that I can rule out.

Genetics came up in conversation again and she didn’t feel that was necessary either. I was confused because I had another doctor mention that A could have some sort of genetic mutation. She told me that the next time that I was pregnant I could just have an amnio done to tell me if anything was wrong. I told her that I couldn’t do that. I already had one preemie and there wasn’t anything that I would EVER do to risk that again. She said if I had it done early enough then it would be okay. Ummmm NO!

Well guess what? Genetics is going to be doing a consult. They came up yesterday but will be coming back on Monday to speak to me.

I also told the doctor that I felt that if A was “typical” then they would be doing everything possible to try and figure out what was wrong with him. That if he wasn’t a preemie and didn’t have cerebral palsy they would figure it out. I really am getting the feeling that they look at him as TOO disabled. But A is my child and that doesn’t matter to me. He is my life and I will continue to fight for him as long as I have to. I think they are starting to realize this.

He continues to have episodes. It seems odd too that most times they are at 2pm and 10pm. I can’t seem to figure out what is going on at that point that would cause this to happen. Two nights ago he had one that really scared his nurse and she is a nurse that usually works in the ER. This says a lot to me. Today he had one for about thirty minutes where he didn’t come above 60. I just don’t know what to think about them. All I know is that they are very hard for me to deal with and I myself feel really scared at times.

Now for some long overdue pictures… 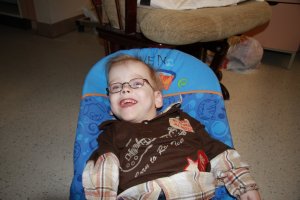 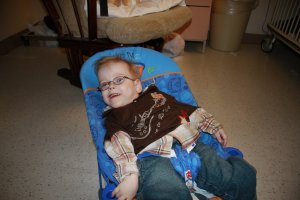 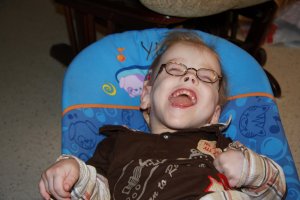 This entry was posted on March 15, 2008 by A's Mommy. It was filed under Uncategorized and was tagged with advocate, cerebral palsy, discharge, echo, genetics, preemie, spells.