First some pictures of yesterday when A was playing with Dawn… 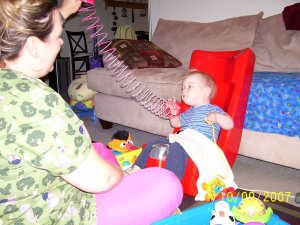 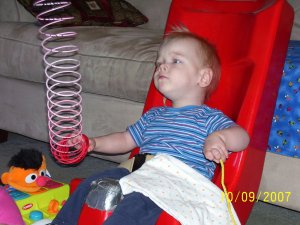 So today was the big day where A FINALLY got to see a lung specialist! I still cannot believe that he has never had to see one considering that he came home on oxygen and has had so much trouble with his breathing and blue spells.

Waiting for the doctor sitting in a gold seat from Maple Leaf Gardens! 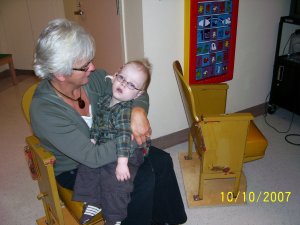 Anyhow the doctor was very great. He had read over A’s file so he knew some of his history to speak with me. One of his biggest concerns is the ALTES that A has had in the past. Again, FINALLY someone that cares about my little man not breathing besides me!

After listening to A and speaking to me for a good while, asking questions and talking things over he has decided on a few things. He does not believe that A has allergies or asthma. This is a very good thing. He also believes that a lot of A’s issues stem from his upper airway and the fact that it doesn’t have muscle to help control swallowing and maintaining an open airway. This would explain his blue spells that he has and the big events as well. When you add reflux to the issue it can make things worse which is obviously what is happening.

When talking about A’s sleeping it is obvious that he may have some issues with sleep apnea. He is going to be ordering a sleep study so that we can see what exactly is going on and whether or not it is obstructive. He warned me that A is at risk for this either now or later because of his past history so it wouldn’t surprise me if that is what is happening now. I am actually kind of excited about the sleep study because I am sure that it can show US what is happening at night.

Second A will be having a feeding study. He wants to know if A is aspirating into his lungs which can cause a ton more lung problems for him. I was supposed to have a feeding study done at Sick Kids before this appointment but they decided to call me last week and tell me that I could go to Mac for that and they were not going to do one. He told me that he will put in the request again.

Third, A will be having a bronchoscopy. The last time that he had one of these was in February of 2006 while in PICU. However this being said it was done by an ENT that has totally messed up with A’s files. I found out today that the report he did after the surgery in December of 2005 while in NICU that he in fact says he never did a laser surgery. WHAT?! I remember EVERYTHING about that day and the week after. It was December 16th 2005 and he came out on a vent. His airway and tongue were SO swollen that he ended up on the vent much longer than anticipated. Anyways I am just blown away that a surgeon doesn’t know what he did or if he did it. Obviously the ENT that we will be seeing is NOT this guy and hopefully the one that did A’s cochlear implant surgery! It would be great to have him as well because he saw what A does while in surgery and in recovery. He told me on June 11th of this year right after surgery that he was worried and he would get to the bottom of it. NOTHING was done. Ashton even had one of his ALTES in the hospital yet nothing was done. Oh sorry, they suctioned him.

Now to the scary part. I will be speaking to a surgeon after all tests are completed about a possible tracheostomy. Hmmm I’ll tell you I could feel the tears well up in my eyes. I can’t imagine WHY my little man has to go through one thing after the other. A trach was actually brought up in the PICU back in February of 2006 but because the spells stopped after the gj they decided against it. I had blocked it from my mind and never looked back.

Well gj tube is still in 20 months later and yet A has still had ALTES. Yes they are WAY less frequent but the happenings are scary enough. It is like the doctor said, we are very lucky that A has recovered on his own each and every time that he has had one, but what if he didn’t?

I think he liked this doctor too!

After that appointment we did some of the usual shopping at the hospital and grabbed something to eat. At 1pm we met with his audiologist for some fine tuning on his implant. He did wonderful in the sound booth turning to sounds at even 20db!!! Everyday I am more amazed with this implant and what it has done for him!

Back at home wearing his new shirt that grandma bought him. My little future NHL star! 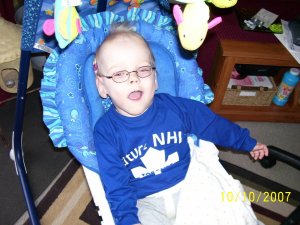 This entry was posted on October 11, 2007 by A's Mommy. It was filed under Uncategorized and was tagged with airway, ALTEs, aspiration, cochlear implant, ENT, reflux, respirology, scope, Sick Kids, sleep study, spells, trach.